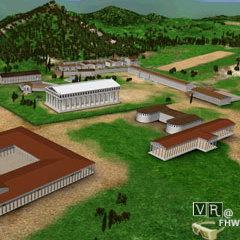 The Virtual Museum let visitors to experience the history of Olympia, participating in the events and the rituals that took place during the ancient Olympic Games.  We are at the end of the 2nd century BC. The day breaks and in front of us appears the majestic sanctuary of Zeus in ancient Olympia. In antiquity the Olympic Games took place here, while today it hosts the lighting of the Olympic flame. So, walk around this sacred site and learn about it! Visit virtually its buildings and learn their history and what was their function: the Heraion, the oldest monumental building of the sanctuary, dedicated to the goddess Hera, the temple of Zeus, a model of a Doric peripteral temple with magnificent sculpted decoration, the Gymnasium, which was used for the training of javelin throwers, discus throwers and runners, the Palaestra, where the wrestlers, jumpers and boxers trained, the Leonidaion, which was where the official guests stayed, the Bouleuterion, where athletes, relatives and judges took a vow that they would upheld the rules of the Games, the Stadium, where most of the events took place, the Treasuries of various cities, where they kept valuable offerings, the Philippeion, which was dedicated by Philip II, king of Macedonia, after his victory in the battle of Chaeronea in 338 BC. Accessible at Tholos Foundation of  Hellenic World (Athens) GR. Developed by Foundation of Hellenic World (FHW) Athens, GR.