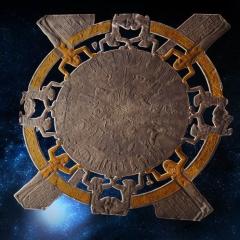 The project aims to identify some of the remarkable myths in the ancient Egyptian civilization and disseminate them to the public in an attractive and immersive way using advanced video and projection technology. The installation visible in Cairo is composed of a three flat screens that display a wide video (2400 x 600 pixels) using 3 projectors, but it's also a portable installation. The screens are arranged in a curved shape and seamless to enhance the feeling of immersion. The video is designed to give very attractive and analytical visual information about two of the most attractive old Egyptian myths, the Zodiac of Dendara and the Opet feast. Dendara was the capital of the 6th Upper Egyptian Nome and is one of the historically and religiously important sites. It is famous for its well preserved and magnificent Roman Ptolemaic Temple of Hathor, the cow goddess of motherhood, fertility, agriculture, joy, sky, underworld, love and music, whose main cult center was Dendara. The temple is also famous for its astronomical scenes. One of these scenes represents the Circular Zodiac, which is considered the oldest complete sky representation in history. The video shows the content of this scene with explanations and comparisons with the recent sky map; an innovative part was created, by singing an opera work of the text surrounding the Zodiac in hieroglyphic with subtitles in English. The second episode displayed in the video regards the Opet festival, one of the most important festivals in ancient Egypt. Information about it comes from the reliefs of King Amenhotep III at Luxor Temple. The video includes also a comparison with the modern Moulid (Festival) of Sheikh Abu El Haggag which takes place now in Luxor. Accessible at: CULTNAT, Cairo, Egypt. Developed by: CULTNAT