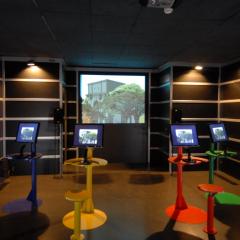 Multi-user VR stereo installation dedicated to the exploration of the ancient Roman road, via Flaminia, and its main archaeological sites, such as the Villa of Livia at Prima Porta.  The "Virtual Museum of the ancient via Flaminia" and particularly the reconstruction of the Villa of Livia is the first archaeological project developed through several media and technologies at the same time. The project's final aims are: