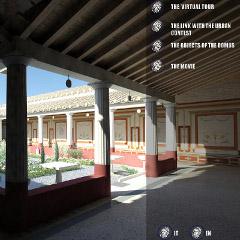 In May 2010 a project called "Teramo: a city virtually dressed” was opened to public, it was realized by the ITABC- CNR, in collaboration with the Municipality of Teramo (a town located in Abruzzo region, in the middle Italy) and the California University of Merced, with the financial support of Arcus S.p.a. The project aims to the documentation, valorization, fruition of historical and archaeological sites, urban paths, museum artifacts, immaterial culture, through the use of multimedia and virtual reality technologies, in order to support the cultural experience of people visiting the town. Teramo is candidate to become the first town in Europe dedicated to “Virtual Heritage” through a project of integrated communication, connecting ontologies disseminated and fragmented in several places but belonging to similar contexts. Different interactive and not interactive installations are available in Teramo Archaeological Museum and in the site of Sant’Anna. An I-POD guide of the city is also available. Developed by: CNR ITABC, for Teramo city museum, ARCUS SpA. Accessible at: Museo Civico Archeologico "F. Savini", Teramo, IT, via Melchiorre Delfico 30, Teramo >link: http://www.teramomusei.it/index.php?id=156