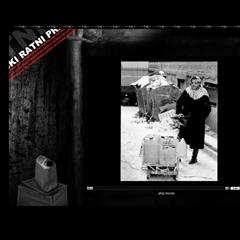 The project presents a story and a virtual presentation of the exhibition “Sarajevo under the siege” by the Historical Museum, which contains the objects created and used by the citizens of Sarajevo during the 3,5 years period when the city was under the siege (1992-1996). The digital content was created by the 3rd year students of the Computer Science Department, as a lab coursework in the Computer Graphics course. Each object is presented by the basic information, photo gallery, movie about its creation and purpose and the interactive 3D model. This project enables the Internet users to learn about the life in Sarajevo under the siege and an extraordinary creativity of its citizens, who succeeded to survive and defend their town in terrible conditions with lack of food, water, electricity and heating, under the permanent life danger. Particularly interesting are the movies, which, apart from the details about the objects, present each student's personal perception of the war period that they survived as children. A part from the Internet presentation, the created digital content will be displayed in the Museum using an interactive display. The project was developed on volunteer basis for the Historical Museum, while all project team members have been in Sarajevo during the siege.