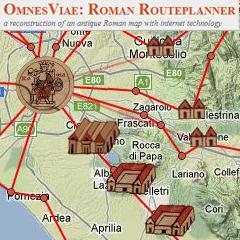 OmnesViae.org presents a reconstruction of Tabula Peutingeriana that is a medieval copy of a roman road map. The online application allows users to find ancient paths across Europe and to discover roads and places on an interactive Google Map. OmnesViae.org updates the original contents of Tabula Peutingeriana with additional information coming from other resources on this topic: mountain passes, connections over water and current place names have been added to complete the Roman World Map and to help the user to understand the ancient map. Geolocation information have been linked to the most important part of the places from the Map. It is possible to calculate the route from a place to another using the simple Google Map Interface, receiving information about the path such as distances, ancient and current name of places, that are represented with red dot and symbols taken from Tabula Peutingeriana. OmnesViae is also an instrument to know informations about the lost western part of Tabula Peutingeriana, including Hispania and Britannia that have been reconstructed using other Roman Maps and documents such as Itinerarium Antonini: in this case, places are represented in grayscale to underline that they are not part of the original map.

A reconstruction of a Roman map with Internet technology.
Total votes: 2108