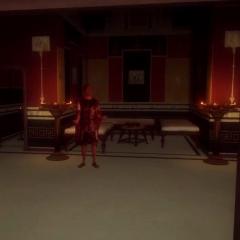 Livia's Villa Reloaded is an innovative virtual reality installation dedicated to the Villa Ad Gallinas Albas, which Livia Drusilla took as dowry to the Emperor Augustus when she married him in the first century BC. This archaeological site is located on a great hill at Prima Porta, at the ninth mile of the via Flaminia, a very important roman consular road built at the end of the third century BC to connect Rome to Ariminum (today Rimini). Starting from digital acquisition on the field, both the archaeological landscape and the actual site have been modeled in 3D, together with the reconstruction of how this context could have been in the past, in particular during the augustan age. The 3D scenarios have been implemented in a Virtual Reality application using mid-air gesture based Interaction. The installation introduces a novel approach in combining different media and languages: real time exploration, cinematographic paradigms, virtual set practices. The installation has been presented and opened to the public at the end of March 2014  in the Musem of Diocletian's Baths in Rome and has replaced the previous Virtual Museum of the ancient via Flaminia

the new virtual museum of via Flaminia
Total votes: 1524