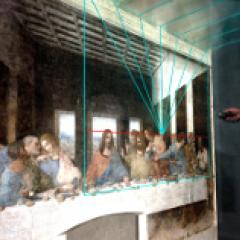 Immersive interactive, meta-aesthetic experience into the power of illusion and the magic of the perspective, inside Leonardo Da Vinci’s Last Supper.

The user is able to penetrate the illusion of the space in- and outside the painting, inhabit and explore the three dimensional composition from the height of the projection center; look “out” from the painted architecture into the real architecture of the refectory and experience in real time the construction of linear perspective interacting with Alberti’s theorem augmented virtual tool designed and implemented ad hoc for LSI Project. LSI was conceived as a 7 distinct phases project. To date 5 phases have been successfully accomplished. During the first phase LSI was hosted within the Multi Mega Book (MMB) virtual reality application. MMB designed primarily to run in the CAVE® (a multi-person, room-sized, virtual-reality system, became a permanent exhibit in the CAVE of Ars Electronica Center, Museum of the Future, Linz, Austria and won the Foreign Title Award in the Theater and Exhibition Section Multimedia Grand Prix'97, Japan). Major goals of the LSI 6th first phase, currently under development, focus in:

Last Supper in the MultiMediaBook

Immersive interactive, meta-aesthetic experience into the power of illusion and the magic of the perspective, inside Leonardo Da Vinci’s Last Supper.
Total votes: 1997