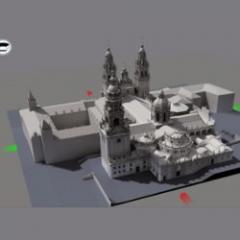 This application is intended to perform the spatial, volumetric and sectional analysis of the Cathedral of Santiago de Compostela by means of a natural interaction scheme implemented on a multitouch device that makes use of common gestures to interactively manipulate, examine and cross-section the model. This cathedral puts together several masterpieces of architectural design from different ages and styles, and it is commonly used as a paradigm both of the Romanesque and the Baroque styles. The construction of the current building began in the 12th century, following the spatial and constructive guidelines that define the Romanesque style in its most pure form. This can be easily appreciated using the interactive cross section capabilities of the application. On the other side, the formal complexity and the profusion of stylistic elements present in the Baroque façade, that dates from the 18th century can be examined in detail using the interactive zoom, rotate and pan capabilities of the application. The real building can also be seen in the application by means of gigapixel spherical panoramas that can be launched by the user in special interest areas. Technically, the main challenge of this project was double. It was necessary to generate a 3D model efficient enough to be rendered in real time displaying such a geometrical complexity that constitutes one of its signs of identity, with the level of detail required, while, at the same time, adding the visual quality of global illumination to show simultaneously the effect of very different illumination ranges from the exterior and the interior and the diffuse interaction of light in the shadow and non-lit areas.

Discovering the cathedral with the natural interaction.
Total votes: 2089