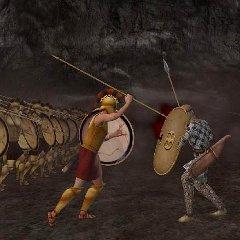 The Battle of Thermopylae in 480 B.C. was fought between an alliance of Greek city-states led by Sparta, and the Persian Empire of Xerxes I, over the course of three days, during the second Persian invasion of Greece. This project was designed as an educational game which aims to deliver the historical context and importance of the battle, the art of warfare of the two civilizations, their cultural differences and how the Greeks were so successful defending Thermopylae for 3 days before they were betrayed. Due to the flexibility they provide, virtual environments can compensate for the shortcomings of traditional instructional strategies, satisfying the needs of different cognitive styles and contribute to the understanding of abstract ideas making them visually concrete. Thus the goal, besides investigating the educational potential, is to be accessible, letting the visitor experience the story in an extraordinary new way, from unique points of view and motivate them to go deeper.  Accessible at: Tholos of Foundation of the Hellenic World (FHW), Athens, GR. Developed by: Foundation of the Hellenic World (FHW), Athens, GR.