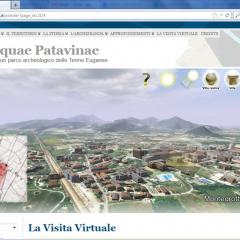 Aquae Patavinae VR is a project aimed at enabling on line users to interactively explore the archaeological landscape of Montegrotto (near Padova, Italy) and to discover its archaeological sites. The 3d exploration is based on a 2 steps experience. (1) First of all the visitors are requested to activate the reconstruction in transparency above the archaeological remains (thus enhancing the interpretation through the comparison with what is still visible or have been excavated) and then (2) to access directly and walk inside the monuments as they should probably have been in the past.

An on line desktop-based version is currently available, based on OSG4WEB plug-in (only WIN/FIREFOX and MAX/SAFARI-CHROME users). There is also a second version under development focused on Touch-Screen interaction and Natural-Interaction (see video link below).