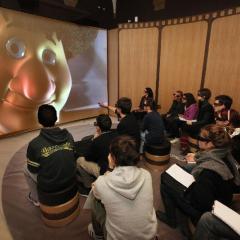 One of the first 3D stereo HD movie created for a museum. The goal is to tell the story of Bologna with a cartoon, historically validated. Not just a movie but 3D short film in which viewers can enjoy a journey through 2700 years of Bolognese history. The two years’ work has been created by a team of 20 people, including director Giosuè Boetto, the art director Enrico Valenza, the character designer Stefano Meazza, the animation director Giampaolo Fragale, IT people at CINECA, among which the project supervisors Antonella Guidazzoli and Silvano Imboden, and several scholars in charge for the scientific accuracy of the virtual reconstruction of 6 different historical sets. The film brings the visitor through the Etruscan, then Roman, Medieval, Renaissance Bologna until the eighteenth and nineteenth century final walk. The "guide" is a funny character found on a bronze vase at the Archaeological and Historical Museum of Bologna. He is a small man with a big belly, short legs and a hat such as "Speedy Gonzales’. The designers have given to this character (Apa, “father” in Etruscan) an interpretation in accordance with his nature, while the voice is that of the famous singer, Lucio Dalla.