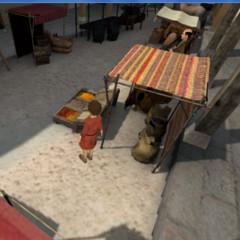 Apa Game is an on line game based on open source software (Blender game engine). It is a V-MUST.NET testbed. It is developed re-using digital asset created for APA stereo movie (2011 new Genus Bononiae, museum of the city of Bologna, Palazzo Pepoli). The game tells the story of a character, Guido, who lives in Bologna during the MiddleAge. Guido, in a rush, fall down into a gap of the street and he is ported back in the past. When he wakes up, he discovers to be in the Roman Bononia and he has to find his way back into his future (Medieval Bologna).