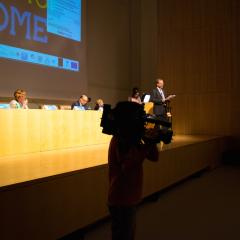 On the 23 September 2014, after 2000 years from Augustus death, 13 countries will meet in Rome, Amsterdam, Alexandria and Sarajevo, for the opening of an extraordinary exhibition, Keys to Rome: an original interactive journey to discover the city of Augustus and the Roman Empire, seen and experienced from its four corners, four fascinating venues, four cities on Roman culture.

"Keys To Rome" is a unique international exhibition, that, for the first time ever the 23rd of september, will be organized in parallel in four incredible locations: Rome, in the wonderful setting of the Imperial Fora Museum; Alexandria, in the amazing rooms of the Bibliotheca Alexandrina; Amsterdam, in the recently renovated Allard Pierson Museum; and Sarajevo, in the newly restored City Hall. "Keys To Rome" is organized by the largest European network of excellence on Virtual Museums, V-MUST, coordinated by the Italian National Council of Researches.
The Augustan age is the main theme for the exhibition in Rome, named “Keys To Rome. The City of Augustus” that will be held in the Imperial Fora Museum. The exhibition in Rome is  jointly organized by the Superintendency of the City of Rome and the Institute for Technologies Applied to Cultural Heritage (ITABC) of CNR, within the communication programme of Rome and in occasion of the two-thousandth anniversary of the death of Augustus. It includes two interconnected and complementary sections focused on storytelling and on the description of most relevant Augustan places in the capital, hence the subtitle The city of Augustus.
The museum collection can be discovered, through a digital itinerary using computer graphics movies, natural interaction installations, multimedia and mobile applications. The journey will be guided by two storytellers, an old merchant and his nephew. They will be led to discover the secrets of the family through the objects owned by their ancestors, using the keys of Rome.
In the Great Hall of the Imperial Fora Museum, a map of the city will give the visitor the feeling of "walking" within the city of Rome of two thousand years ago. The Forum of Augustus, the Mausoleum, the Ara Pacis and all the other monuments, will "emerge" from the map and tell their own story. Two busts of the great characters of the Roman Republic, will come to life and talk about the strategies and the historical events that have led to the rise of Augustus. Finally, video panels will illustrate the news on the latest scientific excavations, witnessing the ongoing research and the presence on the territory of archaeologists of the Superintendency of the City of Rome.
All multimedia technologies used within the exhibition, are the result of a four-years joint cooperation between researchers and developers of the V-MUST project. “Keys To Rome. The City of Augustus” is the concrete result of this effort and it is posing itself as a prototype for the future, testifying the success of V-MUST. Its aim was indeed to provide the heritage sector with the tools and support to develop Virtual Museums that are educational, enjoyable, long-lasting and easy to maintain.
As an addition to the main exhibition, the “Digital Museum Expo” will be presenting workshops and examples of applications aimed at museum professionals and technologists. This expo will be open in Rome, within the Museum of the Imperial Forums, between the 24 and the 28 September 2014. It will be subsequently hosted in the other locations.
Info:  k2r@v-must.net
Credits
Museum Curators
Roma, Lucrezia Ungaro (dir. Imperial Fora Museum)
Alexandria, Mohamed Abd El- Maguid (dir. Library of Alexandria Museum)
Amsterdam, Wim Hupperetz (dir. Allard Pierson Museum)
Sarajevo, Adnan Muftarevic (dir. Museum of Sarajevo)
Digital Curators
Roma, Sofia Pescarin (Researcher, CNR ITABC)
Alexandria, Mohamed Farouk (Director Cultnat)
Amsterdam, Daniel Pletinckx (Dir. Visual Dimension)
Sarajevo, Selma Rizvic (Prof. ETF University)
http://www.v-must.net/activities/keys-rome-city-augustus
Website CNR
Repubblica
Il Tempo
Commissione Europea
Roma Capitale
Corriere della Sera
11 July 2014